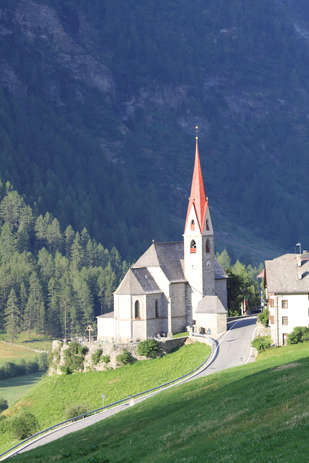 Mentioned for the first time in a letter of donation dated 1418, its origins might go back to former periods in time. At the beginning of the 20th century, the parish church of Riva di Tures as rebuilt in neo-Gothic style, from 1908-1911. The right side altar and the high altar were designed by the sculptor Josef Bachlechner from Brunico, the left side altar was made by the sculptor Freiberger from Brunico. Particularly impressive is the triumph arch of the artist Emanuel Raffeiner from Schwaz, who figured inhabitants of the village.

The church is dedicated to the patron saint of loggers, carpenters and herders. According to the legend, when the saint Wolfgang von Regensburg came to visit Riva di Tures, he personally expelled the devil of the village...